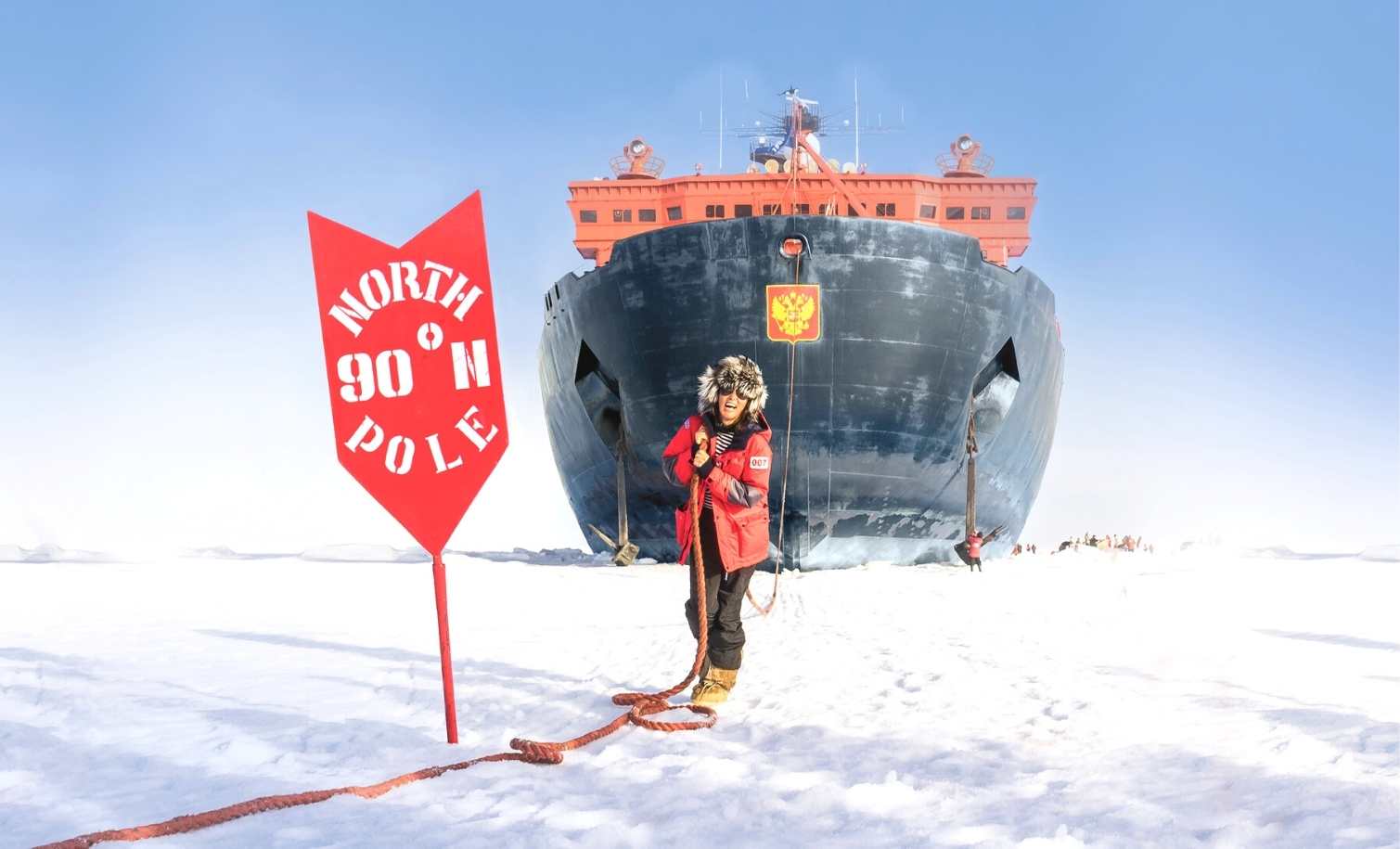 The North Pole cruise onboard a Russian nuclear-powered icebreaker is the ultimate off-the-beaten-path adventure holiday package.

North Pole expeditions are the ultimate goal for intrepid explorers and the most extreme point in the world. For ages, adventurers and explorers have tried to reach this point on a trip to the North Pole by dog sled, boat, plane, and even hot air balloon. The severe reality of the Arctic climate discouraged more than one until 1948.

Even today, North Pole tours remain a test despite the equipment and logistics put in place. Only a few prepared and trained individuals manage to achieve it each year. Now you can add your name to the shortlist of adventurers who have set foot on the “roof of the world” by boarding an icebreaker.

A North Pole trip takes you to the world’s northernmost spot and a place still fiercely sought by adventurers and pioneers. This unimaginable experience starts in Murmansk, a city in the extreme northwest of Russia and the world’s largest city north of the Arctic Circle. There you board the nuclear-powered icebreaker 50 Let Pobedy (50 Years of Victory) for a roundtrip journey to the geographic North Pole of the planet.

Many people dream of being able to travel to the North Pole, but few have had the opportunity to make this dream come true. Thanks to the extensive arctic experience of our Russian partners, it is now possible to get there. You will have the opportunity to reach 90 degrees North, land on pack ice, and see polar bears on the way. Undoubtedly an unforgettable adventure and only a few people have to privilege of acquiring the North Pole tour package.

Check out our North Pole travel options and join an incredible North Pole Expedition onboard the world’s largest nuclear icebreaker. Note that the journey’s program, docks, and other activities depend heavily on ice and weather circumstances and are measured to the judgments of the Expedition Leader and the Captain of the North Pole cruise.

From the early 16th century that it has been estimated that the North Pole is located in a sea. The North pole expedition history has a few centuries of adventures, stories, and endeavors since the first open polar sea expedition, and several journeys are carried out between 1853 and 1876. The explorers, who decided to venture into these distant lands, hoped to find an accessible cruise to the North Pole route on the ice at a favorable time of the year.

When was the first North Pole expedition

The first approved record of the first North Pole expedition and for such a northern human presence dates from June 16, 1596. Willem Barentsz and his Dutch expedition reached latitude 79 ° 49 ’North. Willem Barentsz died the following year. Years later, in 1895, a Norwegian explorer called Nansen approached the North Pole aboard a new kind of ship, the Fram. The rounded hull of this new kind of ship allowed it to be lifted by the ice, not crushed. They are the first to come so near to the North Pole.

How much does a North Pole expedition cost?

Can we visit the North Pole during the war between Russia and Ukraine?